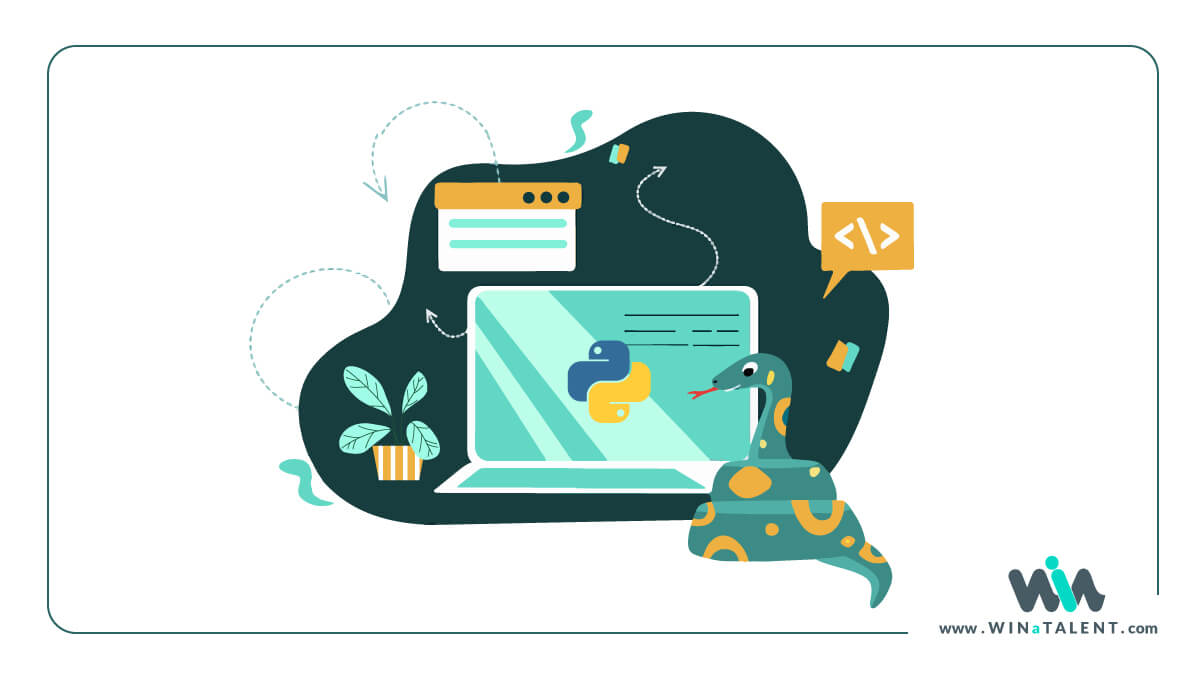 Also, according to the TIOBE Index for June 2021, Python is about to take over the first position in the TIOBE index. The gap between the current number one, the programming language C, and Python is only 0.7%.

According to Google Trends, in the last 12 months, from June 2020 to June 2021, Python is following Java and C++ closely in popularity.

According to all the statistics above, Python is on the rise, and it’s entirely possible to have it as the most popular programming language.

For the reasons we mentioned above, there is a huge demand for Python freelancers and jobs in the software and IT industry; therefore, so many employees are looking to hire a Python developer.

What Is Python and Why Do You Need a Python Developer?

Python is a rendered, object-oriented, high-level programming language with dynamic semantics, meaning that its variables are dynamic. Python’s high-level built-in data structures, combined with dynamic typing and dynamic binding, are suitable for Rapid Application Development. Python is also usable as a scripting or glue language to connect existing segments.

Python is an easy-to-learn syntax that emphasizes readability and therefore, reduces the cost of program maintenance.

Based on python.org: “Python supports modules and packages, which encourages program modularity and code reuse. The Python interpreter and the extensive standard library are available in source or binary form without charge for all major platforms and can be freely distributed.”

The best quality of Python is its high-speed edit-test-debug cycle. Because It does not have ordering steps, and the debugger itself is written in Python. Debugging steps are very straightforward because the bug or the wrong inputs would never cause a segmentation fault.

On the other hand, the fast edit-test-debug cycle approach makes it the quickest way to debug a program by just adding a few print statements to the source.

Python is being used in several web development projects, machine learning, AI computing, and academic research therefore so many jobs get done by python.

World-class software giants such as Google, Facebook, Instagram, Netflix, Reddit, and Spotify use Python. Python is easy to read, easy to learn, and its libraries and frameworks make everything more practical. Also, Python works well with C++, making it easy to integrate with pre-existing code to quickly upgrade it.

What is a Python Developer?

To put it simply, a Python developer is a software engineer who uses Python as the programming language to design, create, code, and debug a computer program. Jobs with Python  usually cover  the server-side of software development AKA Back-end Development.

Python developers can also be helpful in technological framework organization.

They work closely with data collectors and analysts to create valuable solutions and valuable insights.

The work-frame is very variable based on the project needs and requirements. For example, developing applications, designing code frameworks, creating websites, publishing new services, or building necessary tools to solve a problem can all be the responsibilities of a Python developer.

Python is considered chiefly back-end, but it also supports front-end developers by integrating their work with the Python application.

If you decide to get your jobs done with Python, your team can handle web development, scripting, web scraping, data analysis, and automation.

Why And When Do You Need to Hire a Python Developer?

Python is a scripting language for web applications. A scripting language can increase efficiency and automate different tasks that otherwise need to be done manually by an individual. For that reason, Python and similar languages are used as software applications such as pages within a web browser, the shell of operating systems, and some games.

You can launch a job with a Python developer for exclusive application development and maintenance and write server-side codes to make your website a part of the internet.

But Python is a skillful programming language, and these are just some of its many capabilities. You can develop apps, build games, use them in machine learning, network programming, data science, and AI research.

But why do you need a Python developer in your software or app development journey?

There are many benefits and advantages to Python as a diverse application:

Python third-party modules bring the capability of interacting with other languages and platforms.

Python has an OSI-approved open source license, which can be used and distributed for many purposes, including commercial ones.

Every programming language has its tribe of developers that make a community. The Python tribe collaborates through many activities, including hosting conferences, mailing lists, and providing for numerous modules.

The design in Python is clean and object-oriented, providing many improved process control capabilities, robust integration, text processing capabilities, and a joint testing framework. All of these make Python an increased speed and viable productivity option for building complex multi-protocol network applications.

An ideal candidate to hire as python developer should have experience in server-side logic and be a team player. The goal of the whole launching a job with Python is to build a highly responsive web application or any other software aligned with the company’s vision.

What to Expect When You Hire a Python Developer From WINaTALENT?

Provide relevant and detailed information. The most significant workforce today, Millennials, are known as the greatest job-hoppers. Almost 50% of them would leave their current job within two years if faced with a lack of career advancement opportunities. With Python on the rise among tech giants and other software businesses they most definitely find the challenging opportunity they seek.

We understand that searching and waiting can become very frustrating when your time is limited.

Become our client now to end the waiting game of finding and hiring the perfect Python developer.

6 thoughts on “Hire a Python Developer: When & Why Would You Need One?”