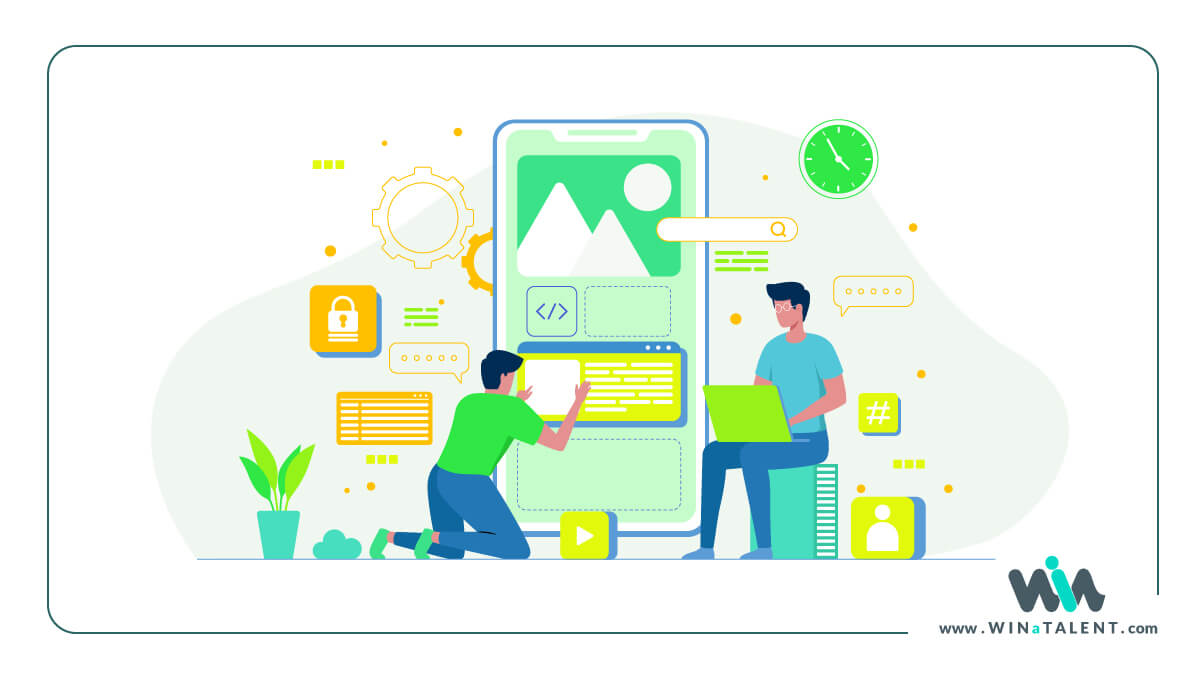 There are many ways to look at building an app and its development. This area has become a very complicated subject in 2021. To make things simpler, the first step is to understand different types of apps.

When someone has an idea about building an application, they have a purpose and a goal in mind. But if they want to start the development process, they need to categorize the application based on type. Therefore, they can focus on the exact talents they would need for the development part. Also, in the process of specifying app type, you can save time and lower your expenses.

In this post, we are going to categorize apps based on type.

The purpose of app development will become clearer by knowing the type of app you want to develop.

In general, we have 9 different types of apps:

The cost of making each kind of these apps can differ based on app type, the number of functional complexities of the design, and IT vendor influence.

The app idea, along with business and functional necessities, affects the app development cost considerably.

In the following section, we are going to give a short definition of different types of apps.

What Are the Different Types of Apps?

They have 5 to 6 screens. There is no need for a back-end or a network connection. Today, these apps are not that common anymore. As most people consume lots of information online, most apps need to operate with the internet. For basic app development, there should be a clear purpose.

Another uncommon app type is a data-driven app. They consume and process particular types of information. In most cases, these apps are either the extension of a larger software product or include additional features.

For example, the Today Weather app uses third-party API information. These apps may need some back-end work, so the cost of building these apps is higher than simple apps.

Other examples of apps in this category are calendar or stock apps, weather apps, and maps.

In these apps, the user has a personal account and interacts with the data. The data is synchronized among devices. This function also requires a corresponding admin panel for content and user management.

The app development cost for this type is higher than the previous app types because there are many other features. Also, it’s advisable to employ registration via social networks (such as Facebook, Twitter, etc.). This procedure is easy and quick to implement. McDonald’s Loyalty App and Google Drive are some of the examples of authentication apps.

In Social Networking apps, the idea is to express social interaction.

The back-end infrastructure of a social networking app should be planned with the intent to process lots of data.

Successful social networking apps start from an MVP or a first basic version that includes the core features of the app.

Want to learn more about MVP and MVP building? Read our blog post about how to build a successful MVP.

On-demand apps are apps that satisfy specific needs or requirements.

These apps can have a similar function to social networking apps. They have login or communication components, chats, calls, and more.

Also, On-demand apps have similarities to e-commerce apps, they have the features of ordering services or goods and making the necessary payments.

The most well-known example of this type of app, which is conquering the market worldwide, is Uber.

On-demand apps usually consist of two apps with different experiences. These two apps have different functionalities, like the driver and passenger apps in Uber or Snapp!.

Some other famous examples are Postmates, Nimber, Mela.biz, and TAPSI.

E-Commerce apps have all the features we mentioned above. They have user registration, user accounts, and social features. These apps are equipped with detailed product lists and catalogs, separate product pages, and a user check-out system complemented via payment and transaction.

E-commerce apps are complex apps. These apps need to have a well-planned back-end admin panel to manage users, orders, catalog pages, payments, inventory, and other features.

Amazon, eBay, Alibaba, ASOS, GoPuff, and Digikala are some of the well-known examples.

There are two sides to the marketplace app concept economically: demand and supply.

These apps need a well-defined user experience and are time-consuming to develop. Therefore, the cost of development is higher.

Applications like TripAdvisor, Booking.com, and Snapp! are some of the examples of marketplace apps.

Internet-of-Things apps connect a smart device via Bluetooth or WiFi to an application. Therefore, there should be a designed device for a certain purpose.

Some of the examples of these smart devices are medical tools, pet collars, and devices for home assistance. Besides the manufactured device there needs to be comprehensive documentation. The built device should work properly and by the documentation.

Game apps and mobile games are the most popular apps in the world. These apps can be simple or complex with 3D graphics, AR support, social media integration, and global ratings.

The cost of development is higher with complex games. Developing a game app can be very profitable. But without proper estimation, it is not possible to say how much a game application will cost.

By now you know the different types of apps and you can decide which one is suitable for your purpose.

Remember this, DO NOT try to come up with a social media app that has games and will also help users find transportation. That’s way too much going on in one app!

WINaTALENT is an online freelancing platform that allows you to find and meet the most suitable talents.

Want to know more about WINaTALENT? Read Our Story!

Sign-up now to meet the talent of your dreams for free!

4 thoughts on “Building an App: Different Types of Apps”